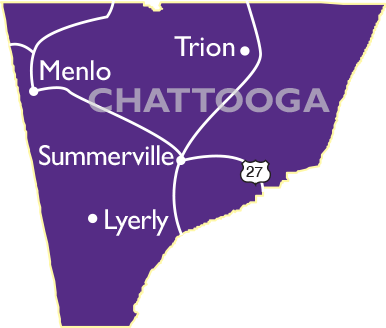 and for being the place where famed Cherokee Indian Sequoyah developed a written alphabet for the Cherokee language, Chattooga County, Georgia borders the state of Alabama.

Another notable resident is attorney
Bobby Lee Cook, who served as a judge,
a state senator from 1957-58, and a
member of Georgia House of
Representatives from 1949-50.

The county is home to the cities of Lyerly, Menlo, Summerville and Trion. Summerville is its county seat.

THE LATEST NEWS...Catoosa, Chattooga, Dade, and Walker Counties all offer tax abatements on qualified real and personal property for new and expanding companies.